From Madrid we took a Renfe AVE high speed train to Barcelona. It ended up costing us about 100 euros per person– if we had booked ahead of time online we probably could have saved a good 30 or 40 euros per person. If I could do it all over again, I think I’d take the night train instead. It would have been about half the cost, and it would have allowed for more time in both Madrid and Barcelona, and it would save us from having to pay lodging for one night.

The AVE train was comfortable though, and it got us to Barcelona in a relatively quick three hours, so I guess it wasn’t too bad a choice. We arrived in Barcelona in the evening, and checked into our AirBnb apartment. Our host was really nice– she emailed a list of things for us to do in Barcelona, and lamented the fact that we really only had one full day in Barcelona.

Our host recommended we eat at the Mercat Princesa, a food market similar to the Mercado de San Miguel that I enjoyed in Madrid. She actually said she liked it better than San Miguel– but I was actually disappointed when we arrived there. It’s a lot smaller than the San Miguel market, and everything was pricier.

We wandered around the area near our apartment. In the area there’s a lot of narrow streets. We’d walk down one of the narrow streets, which would all of a sudden open out into a plaza.

Another time we were walking down a narrow alley, then all of a sudden it opened out into a plaza with an medieval church.

Down another random alley we walked, then all of a sudden we walked into a plaza filled with people waiting for a show. There was a video projected onto a building– it was an entertaining video, but with a really random story that I couldn’t really follow. To me that kind of symbolizes the charm of Barcelona. I kept getting lost down the narrow streets, but I’d keep finding something random and interesting.

After wandering around the narrow streets for some time, we walked down La Ramba, the major tourist street, until we reached the waterfront. There’s a monument to Christopher Columbus there. I thought that was kinda random, isn’t he Italian? Well actually he is Italian, but his expedition was financed by Spain, and after discovering the new world he reported to Queen Isabella and King Ferdinand in Barcelona. So that explains the monument. (Thank you Wikipedia…)

Near the waterfront there’s a ton of restaurants. We stopped at a random one because the guy out front gave me a free sample of sangria. Because the guy was kind of aggressive to get us in the door, I thought the food wouldn’t be all that good, but this actually ended up being one of my favorite meals of the trip. We ordered the fried anchovies and a small order of paella. Both were quite tasty.

The next morning we headed up to Montjuic castle, which is on a hill not too far from where we were staying. Ordinarily there’s a funicular and a cable car to the top, but both were closed for maintenance, replaced by a bus in the off season. 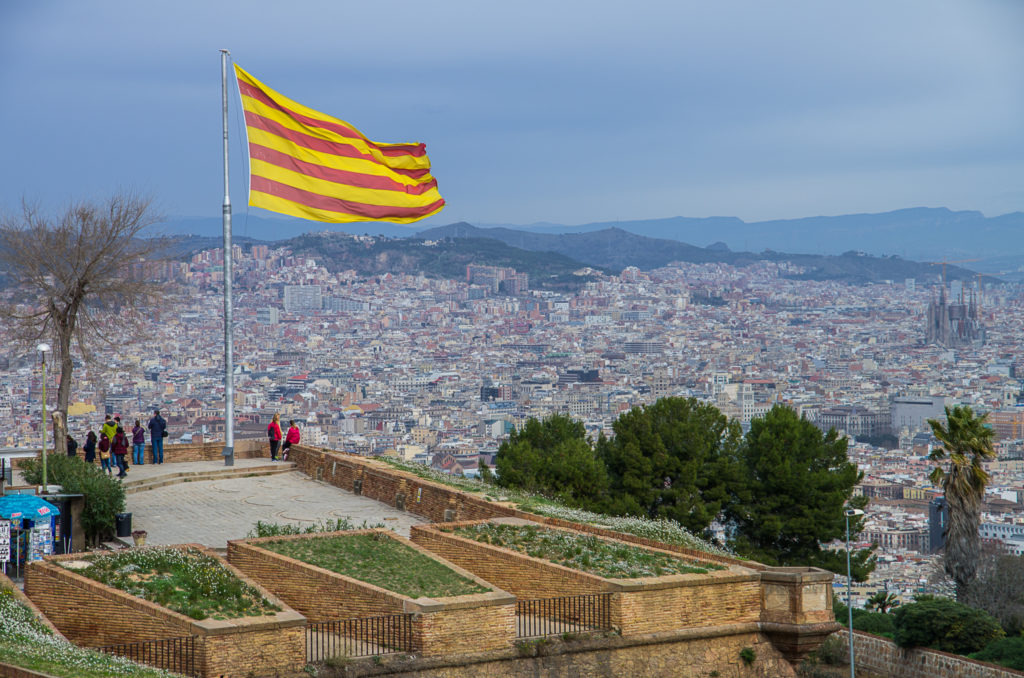 Looking in the other direction there’s an amazing view of the city.

The hill surrounding Montjuic is a big public park, with many amenities including baseball fields and even a model car track. There’s also a botanical garden, which we visited, which had a bonsai exhibit. From the hill you can also get a view of the nearby Olympic stadium.

After Montjuic we headed to Park Guell, another hillside park. This park was designed by the famous Spanish architect Antoni Gaudi. The architecture in this park was really striking– I don’t really know how to describe it, but it’s different from anything else I’ve ever seen.

The park has a paid area that we didn’t visit. I just took pictures of it from afar using my zoom lens.

Here’s another picture of the paid area. At the top of this photo is the terrace from the pictures above it. In the center of this picture is a circle, behind this is a famous lizard mosaic statue.

Next we went to the Sagrada Familia, a church designed by Gaudi. He passed away in 1926, but construction continues today on this church. It’s scheduled to be completed around 2026, the centennial of his death.

The inside of the sanctuary appears to be mostly complete. To me, the ceiling was the most striking feature. Most churches I’ve seen are built on arches– this church is built on hyperboloids. (Heh, I actually don’t even know what that means.)

We went up one of the spires. There’s an elevator to the top, and then hundreds of spiral steps down. This staircase was pretty scary, because unlike most spire spiral staircases I’ve been on, you can see all the way down to the bottom in the center of this one.

Despite having only one full day in Barcelona, I felt like we saw a lot of what Barcelona had to offer. I’m sure we’re really just scratching the surface though. I definitely want to return someday and continue wandering down the narrow streets of this city, I’m sure I’ll discover many more amazing sites.