One thing I’ve always wanted to do is backpack through Europe. I regret not doing it when I was younger, although I suppose it’s never too late to do that kind of stuff. So anyways, after I split up with Jack (he flew back to the states), I continued on my own by train. I always wanted to take the trains around Europe and stop and explore random cities, so on my way to Vienna (from where I’d eventually fly home) I decided to stop in a city called Brno.

I arrived in Brno in the late morning. It was snowing pretty heavily. Thankfully in Prague I had bought gloves and a scarf, so I was warm enough despite the heavy snow and wind.

I left my backpack in a luggage locker at the train station for the bargain price of 60 CZK, which is a little over $3 USD.

I had read that Brno had the second biggest ossuary in all of Europe. So I went to the church of Saint Paul and Peter to see if I could tour it. It turns out I went to the wrong church. The ossuary was actually under Saint James’ church. But after a while I realized that I didn’t really want to tour an ossuary by myself, it’d be too creepy. Apparently there are over 50,000 skeletons there, all just piled up, as you can see here.

I was able to climb the bell tower of the cathedral. There was a nice view from the small balcony, but it was too cold to linger there and enjoy the view.

Afterwards I went to Spilberk castle, which more or less looks the same as it did in 1690.

The bottom two floors of the castle were a historical museum. Apparently the castle was used as a gestapo prison when the area was occupied by the Nazis.

The upper floors of the castle were filled with various art galleries.

The highlight of Spilberk castle was the casemates, which were used as dungeons in medieval times.

This s what a typical medieval prison cell looked like. Prisoners slept shackled to this wooden platform.

Solitary confinement looked even worse. The cells were not even large enough to lay down in. On a side note, I’m really happy with my Pentax K-5. I shot all these casemate pictures without flash at ISO4000, and they still look pretty decent. These pictures look cleaner than pictures from my old K20 at ISO1600.

I spent the night at a place I found on AirBNB. It was cheap at $25 a night. (This shot was taken on my Olympus E-PL1 which I also brought. ISO 1600 on this camera looks pretty crappy in comparison to my Pentax K-5…) 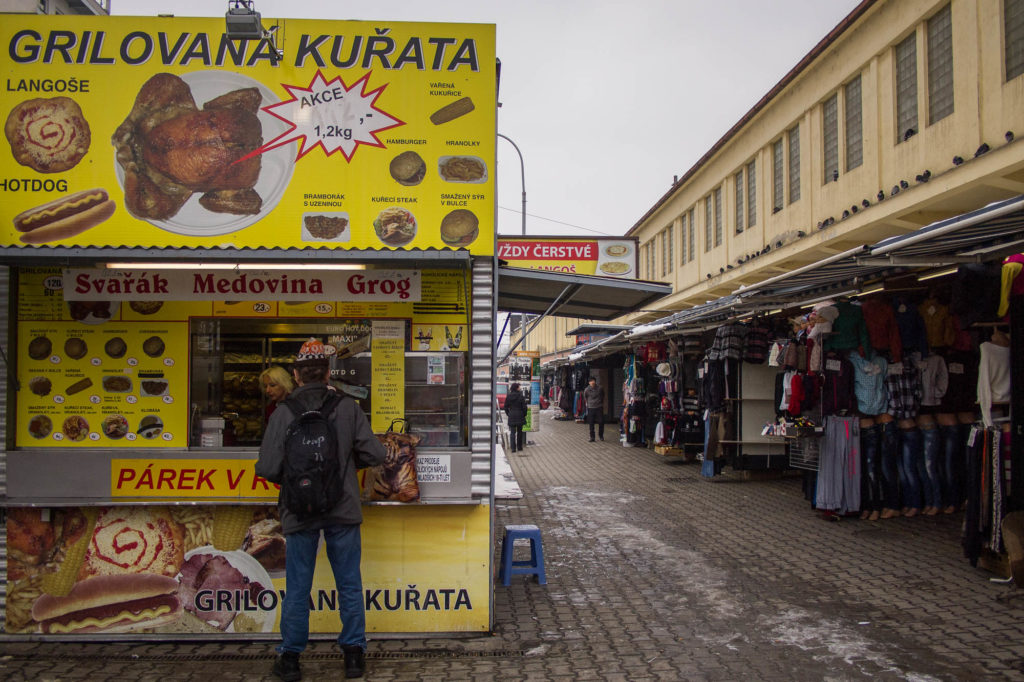 In the marketplace I found a restaurant that was an interesting mix of Chinese and middle eastern flavors. The noodles kinda tasted like chow mien, but the meat was cut from a big shawarma like at a middle eastern restaurant. It was quite tasty, and incredibly cheap. The meal including the beer was 85 CZK, which is about the equivalent of $4.50.

My time in Brno was brief. I found it was an interesting contrast from Praha (Prague). Whereas Prague was very touristy, Brno seems more like a working class town. It seemed like most people didn’t speak English. Despite the language barrier it was still fun exploring on my own, but I’m looking forward to my next stop, Wien (Vienna).

I guess what I’ll remember about Brno is that it’s my first experience at European backpacking (riding the rails, exploring the city, and finding cheap accomodations) and that all the food I ate was a relative bargain compared to Prague.